Born in Daejon, South Korea, Yubeen Kim started the flute at 9 years old. In 2010, he entered the Yewon Art School in Seoul. A few years later, he chose to pursue his studies in France at the Conservatoire National Supérieur de Musique de Lyon, where he has been studying since 2013, first with Philippe Bernold, then with José Daniel Castellon. Since 2010, he has won many prizes : 1st Prize at the Ewha Kyungyang Competition in Korea, Special Prize at the Kobe International Competition in Japan and 1st Prize at the Asia Flute Competition. In 2014, he was laureate of the 69th Geneva International Music Competition, winning 2nd Prize ex æquo (1st Prize not attributed), as well as several special prizes, including the Audience Prize. He has just recently won 1st Prize at the 2015 Prague Spring Competition. 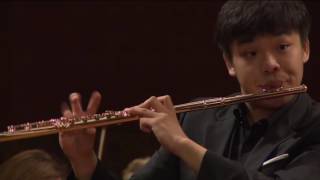